A Long March Toward Progress

Morgan Kousser, professor of history and social science, emeritus, grew up in the segregated South in the 1960s and remembers the sit-ins that took place in his hometown of Nashville, Tennessee. He knew back then that segregation was wrong and came to realize that data and evidence were powerful tools to dismantle racism.

Decades later, and Kousser, who retired earlier this summer, has spent his career fighting racial discrimination through his studies on voter rights and voter suppression. He has written two books and many scholarly papers on laws that fostered racial discrimination as well as laws to combat it, and he has served as an expert witness in numerous court cases, including three voter ID cases and three challenging the disfranchisement of former prisoners. In October, 2019, he testified before a House Judiciary subcommittee on a bill to restore key provisions of the Voting Rights Act of 1965 that were struck down by the United States Supreme Court in 2013. A subcommittee report on the bill called his testimony "compelling" and "persuasive."

Kousser says that making the decision to retire was tough for him because he is passionate about teaching. But he also felt compelled to shift more of his time to time writing about the history of voting rights and school segregation as well as a need to continue to participate in current developments in the endless struggle for racial equality.

We recently met with Kousser over Zoom, where he shared his thoughts on the recent protests over police brutality triggered by the killing of George Floyd, voting obstacles in the upcoming presidential election, and his optimism for the future.

What do you think about the recent string of protests?

We were at a tipping point, and the video of George Floyd's death was so graphic and the oppression so obvious, that it was hard to turn away. One of the things that's important about these protests is that we see a lot a young, white, Latinx, and Asian American people engaged in this. This is a generational protest, and this is the first generation that has come to political maturity since transitions that began in the 1960s with changes to immigration laws. Those laws were intended to bring in Southern and Eastern European immigrants, but the result ultimately was to introduce new populations of Asians and Latinos. People who are growing up now, and who filled the streets of the protests, are people who have come of political age and consciousness at a time of much more diversity and cosmopolitanism. And I think that has made the racial discrimination and the racial oppression that set off this particular movement even more anomalous. It's just strange to people. How could this be happening? Why could somebody be doing this?

Given that you have been involved in the fight against racial discrimination for decades, do the latest protests feel like progress?

At first, when I watched the protests on television, I thought to myself, "Haven't we gotten past this kind of oppression of Black people yet?" But then we saw protestors linking arms in front of the looters, to block them. Black and white people were standing together arm in arm, and this reminded me of aspects of the civil rights movement. The summer after I graduated from college in 1965, I had a job working for U.S. Commission on Civil Rights in Memphis. And one of the things that I had to do was to go around and try to investigate civil rights violations or racial conditions that might be alleviated by the new tools that the federal government had in the 1964 Civil Rights Act. What I remember about those projects is that they involved both Black and white people. Those people driving the civil rights movement were integrated, spirited, innovative, and they were in it for the long haul.

So, to see this happening again in a really parallel fashion, which had not reoccurred since that time, was very heartening. The realization of the importance of allyship, alliances between diverse groups, is something that we have not seen since the 1960s. This gives us reason for optimism.

How do you think the protests might affect the upcoming presidential election?

One optimistic view is that there is an arsenal of tools that people have to fight racial inequalities, and this will force itself into the 2020 election. These tools, such as diverting funding from police to social services or legislation for choke-hold bans, would be set into upcoming political programs because of the particular timing of it.

On the other hand, there could be negative consequences of the protests in that politicians try to stifle the movement with voter suppression. One thing I'm increasingly worried about is voter purging. The National Voter Registration Act, popularly known as Motor Voter, was passed in 1993 and made the ability to register to vote much more widely available, through places like the DMV and welfare offices. But in order to get it to pass the Senate, lawmakers had to add provisions, which essentially allowed for purging voters. Now, registrars of voters purge voters all the time; when voters move, when voters die, they purge them. But they can make mistakes, and purges of voter registration lists have repeatedly had discriminatory effects by race and party.

This purging has already been going on in Florida, Wisconsin, Georgia, and elsewhere, where tens of thousands of voters get removed from the voter rolls. There was litigation about the Florida purges in 2000 and 2004, in Georgia in 2018, and in Wisconsin currently. In every case, there was evidence that eligible Black voters were disproportionately purged in large enough numbers to have potentially changed election outcomes.

You have also done a lot of research into gerrymandering, where legislatures purposefully draw district lines to favor one party and put another at a disadvantage. Do you think we will see that in the next round of redistricting in 2021?

Absolutely. Gerrymandering is something that was blatantly evident in 2011 in, for example, Wisconsin, Pennsylvania, and North Carolina. In a case from North Carolina, the Supreme Court ruled that partisan gerrymandering was nonjusticiable, meaning that it could not be decided by a court. This Supreme Court decision rejected the decades-long efforts of political scientists and statisticians to measure partisan gerrymandering objectively. A 5-4 majority of the Supreme Court said that none of the statistics mattered and that, even if legislators openly boasted of their aim of punishing their partisan opponents, courts were prohibited from intervening. What's worse, and what will likely happen in several states—Texas being the most important due to its size—is that a lot of undocumented people will not be counted in the national census. And then, when they redistrict, the legislatures of those states are clearly planning to disregard even those undocumented people who do answer the census. Members of Congress have always been allocated between and within states by total population. That is almost certain to end in 2021. Instead of "one person, one vote," we will have "one voting-age citizen, one vote." If you think you've seen gerrymandering before, you have not seen anything yet.

What kinds of projects are you going to continue in retirement?

There are things which I simply have not been able to get to until now, such as my research pertaining to the Voting Rights Act. Last October, I testified at a congressional subcommittee hearing on restoring key provisions of the Voting Rights Act of 1965, which prevented racial discrimination. In 2013, Chief Justice John Roberts contended that the voting provision under the Voting Rights Act, which required certain jurisdictions to pre-clear the election law changes before they went into effect, wasn't needed anymore. But the chief justice was wrong, and this is something I have been documenting with a database of voting rights cases that show that the locations of racial discrimination in voting had not changed very markedly since the last expansion of the Voting Rights Act in 1975. If Democrats control the House again in 2021, and this voting coverage scheme is challenged in court, they will be able to rely on my research for justification.

I also have a very longtime project on racial discrimination in schools in 19th-ccentury America that got pushed out of the way by all of the voting rights research. There are at least two books in that, as well.

So, I'm working on two big projects, but I will greatly miss teaching in my retirement. It's still as much fun as it as it ever was. The kids are wonderful, they continually inspire me, and I learn new things with every class. I'm very reluctant to retire from all that, but I have a lot of writing to do. 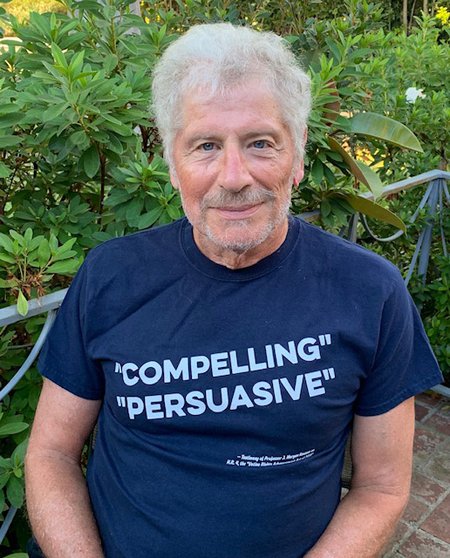 Morgan Kousser wears a t-shirt his son made for him highlighting comments a judicial subcommittee made about his testimony. Kousser's testimony, which the subcommittee called "compelling" and "persuasive," supported a bill to restore key provisions of the 1965 Voting Rights Act.
Image Lightbox
Subscribe
The Caltech Weekly