In 2019, 125 women in STEM became members of the IF/THEN Ambassador program of the American Association for the Advancement of Science (AAAS). The initiative, designed by Lyda Hill Philanthropies, brought together women from a variety of STEM careers to serve as "high-profile role models for middle school girls." Among the women selected for this new outreach initiative were Caltech alumna Crystal Dilworth (PhD '14) and former postdoctoral scholar Erika Hamden (Postdoc '14).

Now, members of the ambassador program—along with Caltech trustee Shirley Malcom, who was part of the team that selected the ambassadors and is now an advisor to the program—are being honored with life-sized 3D-printed statues of their likenesses in #IfThenSheCan—The Exhibit. The 120 statues constitute the "largest collection of statues of women ever assembled together," according to the Smithsonian, and will be on display in Smithsonian gardens as well as in and around certain of the Smithsonian museums until March 27 in honor of Women's History Month and the Smithsonian's new Women's Futures Month celebration.

The Smithsonian notes that the statues create a "diverse coalition of contemporary women STEM innovators and role models leading a variety of fields" and creates an opportunity for visitors to the museums to "come face to face with entrepreneurs, educators, scientists and conservationists who are building the future." Each statue has a QR code that provides information on the personal story of that featured woman.

Malcom explains that the idea of the exhibit resulted from a study of statues in major cities across the country by the Lyda Hill team, which wanted to understand who is featured and celebrated in statue form.

"There were not a lot of women among them," Malcom says. "What does this mean to the children and parents and grandparents who are looking at these messages? What is the message we are sending?"

The IF/THEN Exhibit is one step toward addressing that.

"These striking 3D-printed figures of remarkable women in STEM careers help us celebrate the incredible impact women continue to make on vital scientific endeavors," said Secretary of the Smithsonian Lonnie Bunch in a statement. "This exhibition highlights how a more diverse, more inclusive workforce will strengthen our shared future."

Here, the Caltech women featured in the exhibit talk about the ambassador program, their statues, and the impact this kind of representation can have on society. 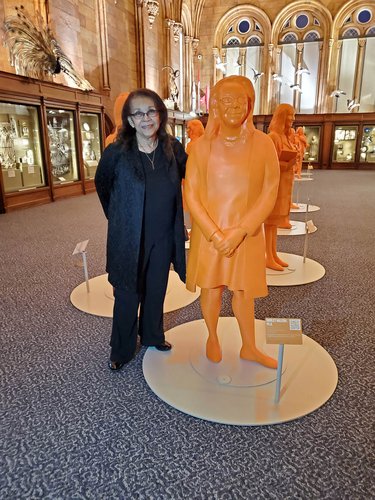 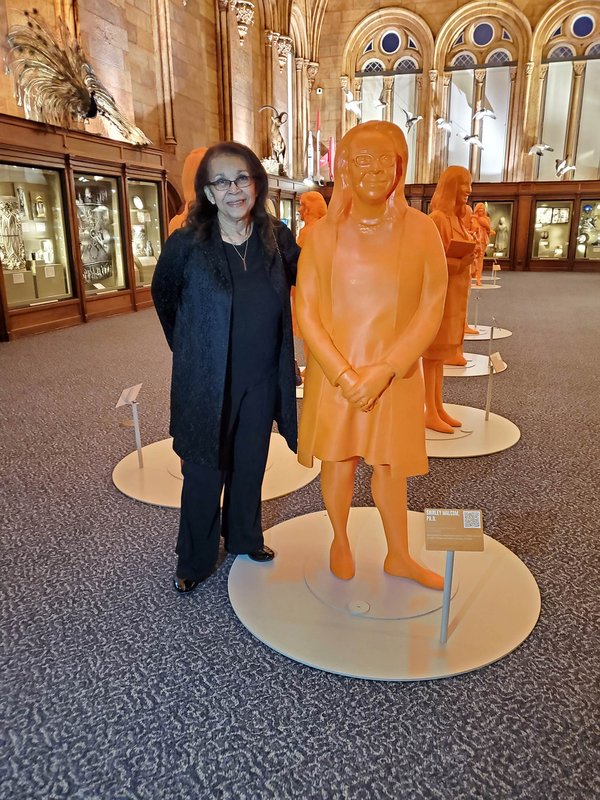 "It's hard for me to say what it means, what it was like to help create something like this. I have done a lot to help build things, and this one is special. It just kept evolving.

"For me, the whole question about who you remember and who you celebrate is an important one. Representation, science identity, and 'belonging' within science are really difficult. As a Black girl growing up in Birmingham, Alabama, I had a much rougher time trying to build a life in science. I had to become something I had never seen: a Black woman in science. It just wasn't expected, it wasn't encouraged, and you had to push through to make it happen. I know what it feels like to be the 'only' in a class, not to be included in a study group or selected as a lab partner.

"The presence of these statues at the Smithsonian, even for a month of remembering and celebrating, carries a message that this is important. We are out there! Not as many as there might be if the world of science and engineering were more equitable and supportive of our interests and ambitions, but we are out there.

"To me, the statues are real; they are multifaceted people with many different identities and life roles. They represent every career level, and that was intentional. To help create an initiative like this, where so many women in STEM and women who use or communicate STEM can be represented in a big way, is a real joy. I certainly had not expected to be included in the group of statues, but I am proud to be connected to this initiative in a personal way." 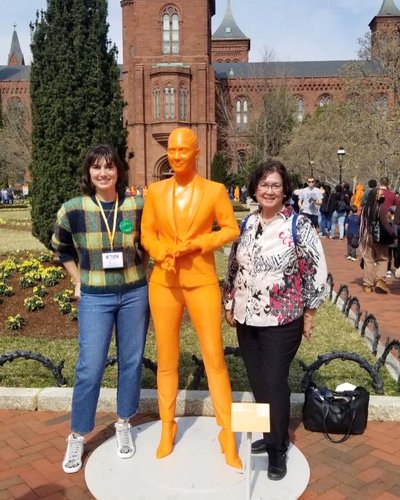 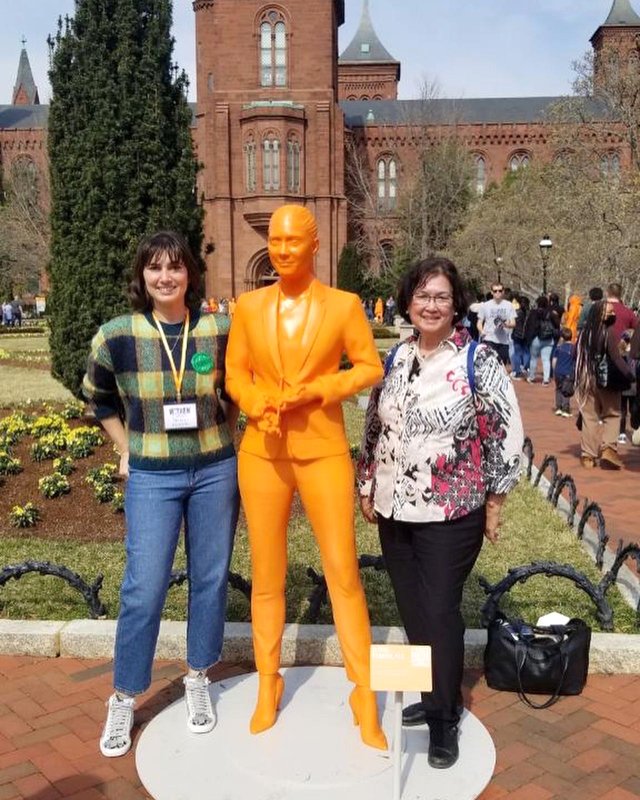 "When I first saw my 'orange twin' standing there in the context of the nation's capital and with the edifice of the Smithsonian Castle in the background, I thought it would be surreal, but it wasn't. It was just really, really cool. A statue at the Smithsonian is an incredible life achievement.

"Saturday [March 5] was opening day, and it was a beautiful winter day in D.C. So many people came out walking on the mall and wandered into the gardens. While standing next to my statue to engage with the public, I explained my journey from studying nicotinic acetylcholine receptors at Caltech to a career in media and communications so many times. Many of the people I spoke with shared stories about how they had failed to connect with traditional methods of scientific education but found their way back through other forms of media like television or video games. It felt so good to have the audiences I work so hard for validate the work that I do!

"Lyda Hill and her philanthropic team has given each one of us an incredible gift. It's hard to feel imposter syndrome when you're standing next to a statue of yourself that was created to celebrate your achievements.

"For me it is especially important to be able to share this moment with my mom. My mother immigrated to the United States from Indonesia when she was very young. She was the first person in her family to go to college, and she successfully attained a bachelor's degree in microbiology. She's our family's original woman in STEM. She also homeschooled me up until the time I was able to attend classes at the local junior college when I was 11. I want her to feel like she did a good job raising us, and a statue and national recognition is a great way to start!"

Erika Hamden (Postdoc '14), assistant professor of astrophysics at the University of Arizona: 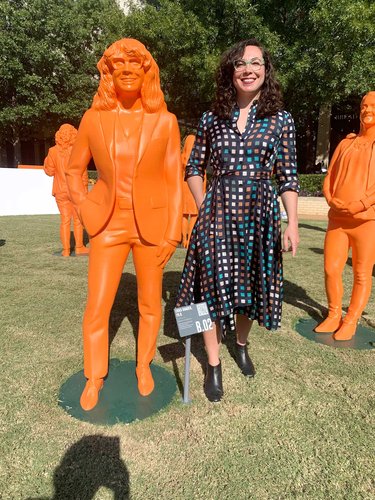 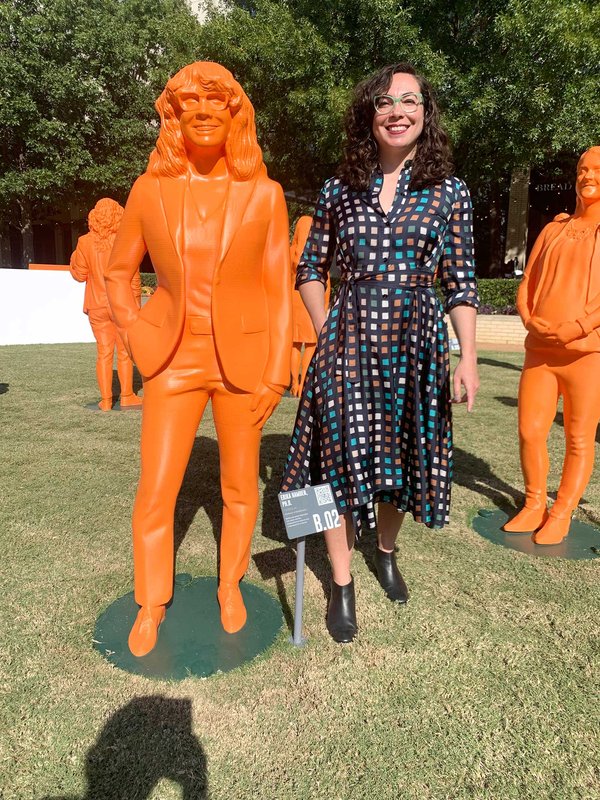 "Being part of the AAAS IF/THEN Ambassador program has been an amazing experience. It's provided me with so many fun and interesting opportunities to engage with a much wider audience about my work, from TikTok to Comic-Con. Probably the best example of that was being featured on the CBS kids' program Mission Unstoppable and having my sister call me to say that her kids ran up to her on a Saturday morning shouting, 'Mom! Auntie Erika is on TV!'

"I've also been so hugely impressed by the other ambassadors in the program; it's a group of really amazing women. I've been able to meet such incredible and inspiring people, all of whom are working on interesting problems and making big discoveries.

"I'm especially thrilled that my statue will be placed in the National Air and Space Museum in D.C. As an astrophysicist, I've looked up to so many of the people in the museum; I can't believe that my own statue will be among those of my own heroes. I'm truly in awe."

Share this
Tags
awards and honors
See All News   >