Navigating the graduate school application process can be an overwhelming task, with decisions piling up on everything from finances to where to go and what to study. On November 1 and 2, 33 women making their way through this process gathered at Caltech to attend the inaugural FUTURE of Physics event, a program that brings junior and senior undergraduate women in physics to Caltech for two days of panels and mini-workshops on big-picture science, student life, graduate applications—and how to weather the physics climate as a woman.

"Prior to FUTURE, I was feeling unsure of my place in the world of physics, unsure about whether I wanted to go to grad school, and overwhelmed by the process of applying," says Sophia Gaynes, an undergraduate student from UC Berkeley who took part in the program. "And now, I feel like I have a better understanding of how to navigate the field as a woman and concrete steps toward applying to grad school."

"We are delighted that our physics, math and astronomy division has reached out to these talented students to showcase the opportunities for graduate education and research at Caltech," says Douglas Rees, dean of graduate studies and the Roscoe Gilkey Dickinson Professor of Chemistry at Caltech. "By introducing populations of students to our campus who might not have otherwise considered Caltech for graduate school, the FUTURE fly-in program will be critical to ensuring a diverse campus community that can attract the best researchers."

The women participating in the program came from a range of backgrounds, including top research universities, other non-research undergraduate institutions, women's colleges, and historically black colleges.

In one panel discussion that focused on life as a female graduate student, the audience heard from current graduate students about the challenges they have faced as women scientists as well as their strategies for handling those challenges. Cora Went, a Caltech physics graduate student and co-chair of the FUTURE conference, talked about the value of joining women-based groups at universities or even establishing them if they do not already exist. At Caltech, Went is the president of the Women in Physics, Math and Astronomy (WiPMA) group. She said that before she started graduate school, she wondered if her adviser would take her seriously but that picking a lab group with many other women helped alleviate these concerns.

"Our office meets regularly with students and leads both a graduate and an undergraduate Title IX advisory council, which has much input into the activities of the office," she said.

Attendee Dominika Durovcikova, an undergraduate student at the University of Oxford, said the program was "inspiring" and that she liked meeting the other women participants as well as the organizers, faculty, and postdocs in physics. "I especially liked that you could feel the enthusiasm of everyone you were talking to and their love for their work. That was great encouragement to pursue an academic path as a physicist. I am now more determined to pursue grad school, and I feel that I am prepared to do so."

The FUTURE participants also had a chance tour several research labs and to talk with faculty directly at a roundtable mixer. They asked the professors questions about graduate school admissions, work-life balance, and what they like about their jobs. Among the faculty participating was Caltech's Fiona Harrison, the Kent and Joyce Kresa Leadership Chair of the Division of Physics, Mathematics and Astronomy (PMA) and Benjamin M. Rosen Professor of Physics. When asked if it is possible to switch your focus during graduate school, Harrison explained that at Caltech, the first year is for exploring; graduate students do not have to present their idea for a thesis until their third year. "We make it easy to move around," she said, noting that she herself switched from condensed matter physics to her current passion, black holes, during graduate school.

"We want to support the ambitions of aspiring young women in physics who will go on to become part of a diverse generation of scientific leaders," says Sofie Leon, director of PMA's graduate program, who helped organized the event. "At the same time, we want to boost the pool of talented female applicants to our graduate program and advertise Caltech as a top destination for aspiring female scientists."

The FUTURE program was funded by the Heising-Simons Foundation and the PMA division. 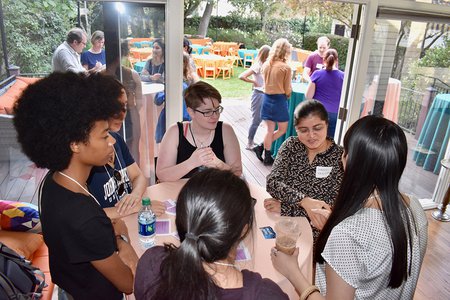 Participants of the FUTURE program chatted with faculty members at a roundtable mixer. Credit: Caltech

A group photo from the FUTURE of Physics event. Credit: Caltech 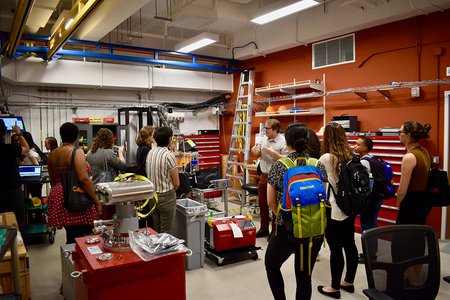 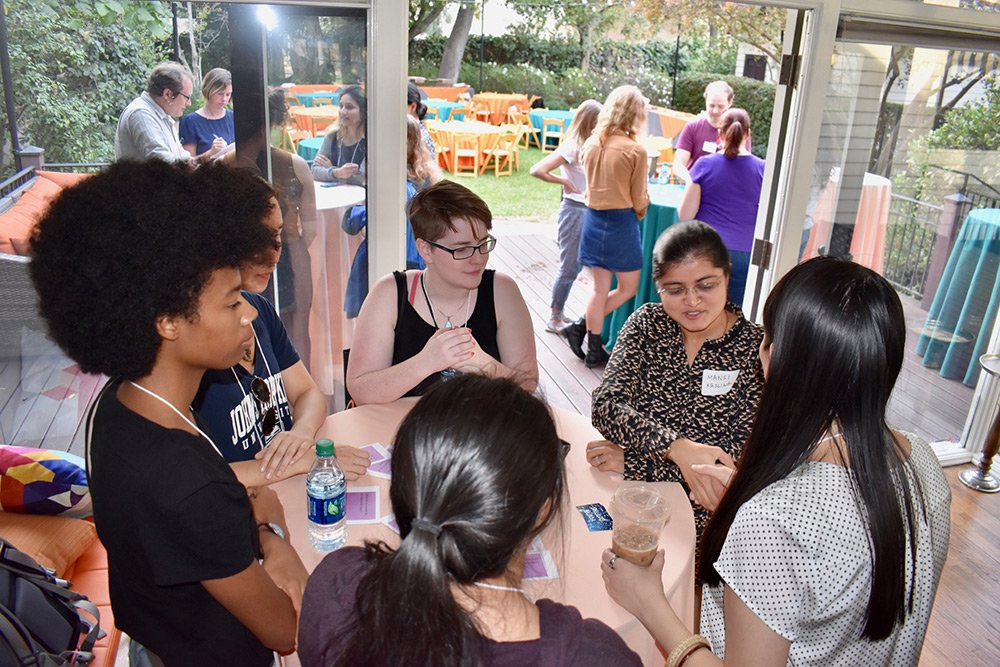 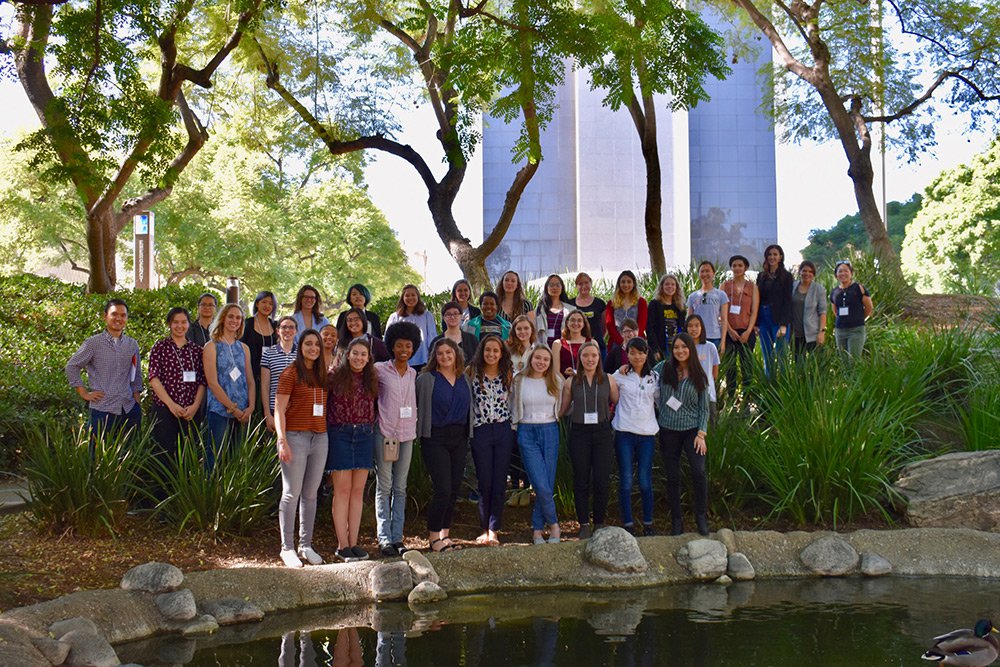 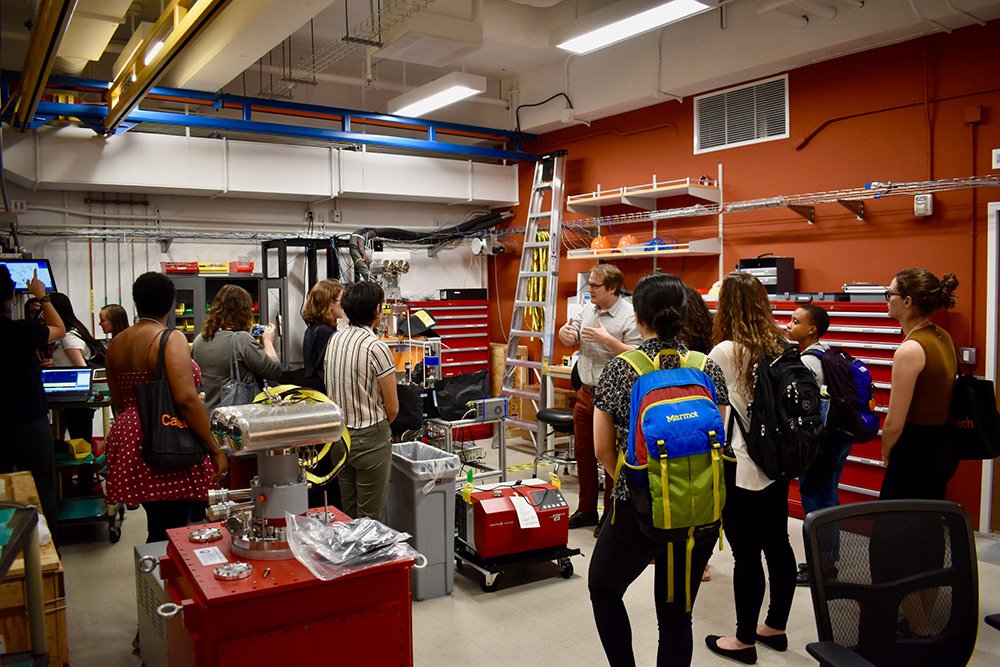